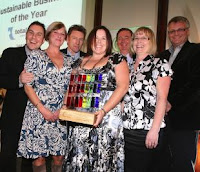 Total Coverage left the Sustainable Business Awards ceremony at the De Vere Grand Harbour Hotel in Southampton last Friday clutching both the Micro Business and Sustainable Business of the Year trophies. Singling them out for the highest honour, the judges praised the Southampton-based design company for its all-round commitment to each of the three pillars of sustainability; the way that social, environmental and economic impacts were considered in every aspect of the business’s operation.

Their ongoing action to reduce energy consumption and carbon emissions, close involvement with customers and suppliers to help them reduce their own impacts, waste minimisation activities and support for local charities all speak of a company which has fully embraced the principles of sustainable business.

Earlier in the evening, when they had been named as winners in the fiercely contested Micro Business Category, sponsored by the Sustainable Business Partnership, ceremony host Dr Alan Knight had also singled out Total Coverage’s success over 20 years operating as an ethical company.

Director Linda Bratcher says:
“To win both awards is a fantastic achievement, everyone at Total Coverage is very proud. It gives us all a great feeling when all our hard work and commitment is recognised by others.”
by Unknown at 27.11.08 1 comment: Links to this post

It all started in 1982, at a time when collecting waste paper for recycling provided a valuable source of income for many voluntary organisations, churches and so on. But without a market for the end product, prices fluctuated wildly, and three environmental activists decided to do something about it. By selling and promoting recycled paper, they reasoned, they could help to stimulate demand and thus stabilise the market.

After a year of market research, business courses and market testing of recycled stationery products at a stall at Camden Lock Market, they were ready to go, and Paperback opened business on the third floor of a building in Hoxton formerly occupied by printing presses. This is now an extremely fashionable area of London, full of pavement cafes and art galleries, but in 1984 it was run down and rents were low. Paperback was also set up from the start as an employee owned company – a workers co-operative – which it remains to this day. As founder member Jan Kuiper puts it:

“having a real stake in the company’s fortunes makes for a greater commitment amongst the people working here”.

From small beginnings selling stationery by mail order and supplying community centres with duplicating paper, Paperback grew steadily, soon moving out of Hoxton into a purpose built warehouse in Bow, East London. A move made possible by a financial injection from around 100 sympathetic lenders. It also moved quickly from selling existing recycled papers to working with mills to develop new grades.

The range of papers available at the time was very limited, fine for the Paperback stationery packs that came in a range of attractive designs and colours, but not so good for business use, and few companies and organisations outside the network of small printing cooperatives and alternative bookshops were willing to try it. In 1985, assisted by a government grant and technical back up from PIRA (the Paper Industry Research Association), Paperback developed the first coated recycled paper, ‘Sylvan Coat’, in association with a UK paper mill. This was only the first of many collaborations which have helped transform the recycled paper market in the UK, not to mention the image of recycled paper itself. From selling to environmental organisations like Friends of the Earth and Greenpeace, Paperback’s owners found themselves supplying paper to COI, British Airport Authority, NatWest Bank, British Airways, Westminster Council, the Body Shop, Tesco’s and the BBC.

The market has of course changed completely since Paperback’s early days. Green waste bins are now a normal part of office furnishings and Local authorities collect last week’s Mails and Guardians, which were printed on largely recycled paper in the first place. Nearly 40% of paper is now collected for recycling in the UK (compared to 28% in 1984), although more than 50% of this is sent abroad (especially the Far East) for reprocessing, as our own paper industry contracts. Recycled paper has lost its homespun image; there is no longer any question of sacrificing high quality for the sake of environmental credibility and recycled paper is available not just from specialists like Paperback - conventional paper companies have also now seen the sense in selling these ranges.

Of course the entry of the big conglomerates into a previously niche market is a mixed blessing for small firms like Paperback. It means their ecological message is being taken more seriously, but it also makes it more difficult for them to compete for customers. This has been a recurrent pattern for the company since it was founded – a constant need to be a step ahead of the market. In the last ten years, for example, Paperback became the first FSC (Forest Stewardship Council) certified paper merchant in Europe. It followed this with the launch of a new range of natural looking papers under the Cairn brand name which have proven popular with retail companies such as John Lewis, Top Shop, Marks and Spencer, Sainsbury’s and other customers such as EDF and the Royal Mail.

Trading conditions in the last two years have been particularly tough. The number of paper mill closures in the UK has been unprecedented. This development has been exacerbated by this year’s credit crunch. There is uncertainty in the market, reluctance to spend on advertising and promotion. Nevertheless the achievements of Paperback to date have been tangible: approximately 25,000 tonnes of recycled paper sold (equivalent to about 30,000 tonnes of waste paper diverted) representing something like 375,000 trees!!

Happy 25th Birthday Paperback!
by Unknown at 27.11.08 No comments: Links to this post

Print and design co-operative Calverts received silver in the 2008 Mayor of London's Green Procurement Code Awards. A life cycle study showed Calverts recycled paper purchasing diverted 76 tonnes of post consumer waste, reduced CO2 emmissions by 107 tonnes, saved 2,301,300 litres of water and 176.43 m3 of landfill space. Since 2001, Calverts has measured and reported its purchasing of recycled publishing papers as part of a drive to achieve progressive environmental impacts and contribute to building markets for recycled paper products. The co-op, which holds the Green Mark award and is Forest Stewardship Council (FSC) certified, expects to qualify for the ISO14001 environmental management accreditation in 2009.
More at www.calverts.coop/blog
by Unknown at 25.11.08 1 comment: Links to this post 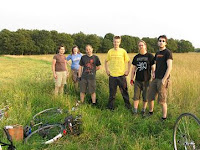 Unicorn is an award winning co-operative wholefood store that specialises in local, organic produce and is owned and controlled by its 45 employees. It is now the proud owner of 21 acres of prime growing land in Glazebury, 14 miles to the west of Manchester.

Unicorn worker Rob Alderson, who has been involved in buying the land, explains: "We decided to secure land in our locality so that we can have a secure supply of organic veg for the long term. After 12 years of successful trading and working closely with farmers, we are in a great position to go ahead with this project. We know what produce the shop needs and our customers value greatly the benefits of a local, fresh, affordable supply."

As a sign of the commitment of its customers, Unicorn raised the £200,000 needed to buy the land from the local community. Customers loaned the co-operative money through a 'loanstock' scheme and in return could choose an interest rate of between 0% and 6%. This is the third round of loanstock Unicorn has offered - it raised £350,000 to buy its premises in 2000, which it has now paid back in full.

Rob continues: "We sell the freshest, most affordable produce around and, year on year, have increased our regional supply of organic produce. To feed a city in a sustainable way we need more growing land near the shops that sell the food - it's simple."

"By pioneering new ways of supplying local, organic food and developing an incredibly strong base in the local community, Unicorn is a terrific example of how business can be done in a sustainable way," says Dame Pauline Green, Chief Executive of Co-operatives UK.

"This is something that is likely to become ever more important as food prices climb higher and resources dwindle."

How do you pay yours?

Over on our facebook group there is a discussion about pay at worker co-operatives. I am interested in the different models used and what the benefits are, How do you pay yours?

Here are some I have come across:
1. Complete equal pay (with profit distribution or not).
2. Equal pay, with pay increments at various points (older members will always get paid more).
3. Equal pay with profit distributed by various factors (may incl non-members or not)
• Length of service
• Fee earned hours
• Amount of share investment
4. pay increased based on responsibilities taken on or qualifications received.
5. I have heard some co-operatives used to operate on a needs basis where pay was distributed dependent on the members needs (had more children etc)
6. Of course more traditional types of pay.

Join the discussion or send me an email as I would like to know your views.
by Unknown at 18.11.08 No comments: Links to this post

While I was in Bristol I visted Co-opportunity, A worker co-operative since 1997 founded by: Mark Hitchins, Simon Jacobson and, Tim Blanc. They have grown to 5 members and deliver financial accounts and database solutions to Local Authorities and third sector organisations. Among other things we discussed tax effeicent profit distribution for IPS co-operatives and why Bristol has such a large cluster of co-operatives. 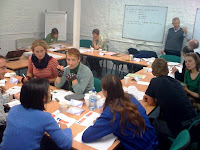 I've had a busy week in Bristol, visiting worker co-operatives and attending training organised in partnership with the Co-operative College and Avon CDA.

It was also a great opportunity for members to discuss each others businesses and share their approaches to issues from a worker co-operative perspective. I was amazed at the variation and differing approaches, to solving the same business issues. The one constant; that workers owning and controlling their own business is the key to sustainable business success.

I hope to arrange more training and opportunities for worker co-operatives to meet up and share experiences in the future.
by Unknown at 6.11.08 No comments: Links to this post

This blog contains opinions from and about the 500 worker co-operative and employee owned businesses in the UK. If you are interested in this form of business get in touch:
john.atherton@uk.coop
0161 246 2961