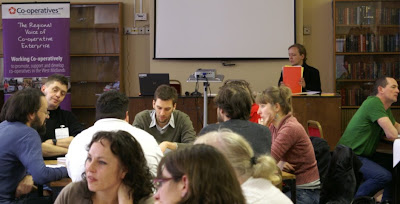 Its been a busy week with the launch of Co-operatives Fortnight and the Tory's recent conversion to co-operation. So busy in fact that I haven't had time to write a blog on the fantastic Food Co-operative Forum that took place last Friday in Birmingham. So here it is:

Co-operativesUK working in partnership with the Making Local Food Work Project organised an event aimed at Food Co-operatives; from the smallest buying group to the largest wholesaler.

The wholefood/local food sectors are flourishing and co-operatives play a large role in this sector. There are 100's of local buying groups and retailers like Unicorn and Daily Bread; the combined turnover of the worker co-operative wholesalers alone is £55m.

The purpose of the event was to bring them all together; to discuss how they can grow, develop themselves and the sector as a whole. The day started with our own Secretary General Ed Mayo talking about the food choices available to children and the broader case for co-operation . Kath Dalmany talked about Sustain and the growth of the local food sector. Mark Simmonds talked about Governance and training on offer from Co-operativesUK. There were also inspiring stories from True Food & Ipswich Ripple.

But the best part of the day was in the afternoon (facilitated by CLADA) which became an open space event. Delegates chose what to discuss, who to discuss it with and worked through issues; offering insights and resolutions.

For me; what was so great about this event (and can be seen in the picture), was having some of my largest members: Suma, Essential, Infinity, GreenCity and Lembas all together in the same room talking about co-operation.

With the recent focus on community co-operatives, social enterprise and now public sector solutions it is sometimes forgotten that Co-operatives are businesses and operating under normal market conditions. Co-operation is a tricky thing particularly when you directly compete with each other. But we had some great discussion; dispelling myths, facing realities and hopefully coming out the other side with some real resolutions to improve our co-operation in the future. I can't wait till next year!
by Unknown at 18.2.10 4 comments: Links to this post

Co-operative Fortnight: There is an alternative 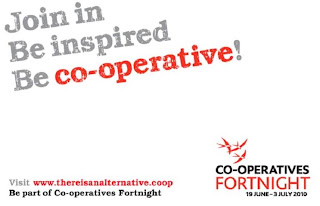 Co-operatives Fortnight will be an amazing opportunity for worker co-operatives to get involved in the wider movement and promote themselves as an ethical alternative (particularly relevant in the present economic situation). This is ripped straight from our press release but, its good stuff:

Co-operativesUK is calling for advocates of co-operation up and down the country to take part in Co-operatives Fortnight, from 19 June to 3 July, to help promote co-operatives as a better alternative.

Co-operatives Fortnight, a groundbreaking new initiative to help promote co-operatives as a better alternative will be a major campaign with the timely theme – There is an Alternative – and a new dedicated website – www.thereisanalternative.coop – full of resources and ideas.

To make the Fortnight a success, Co-operativesUK is urging co-operatives across the country to get involved in showcasing what makes them and co-operation different.

A range of tools are available on the website to help co-operatives promote themselves during the Fortnight. In the coming weeks, new content on the website will include resource packs, striking posters and simple guides, films and forums.

As Ed Mayo, Secretary General of Co-operativesUK, puts it: “The Fortnight is going to be truly collaborative.

“We want all co-operatives whatever their size to do something during the Fortnight. Whether that is putting up posters, hosting a meal for members, organising an open day for the public or collaborating with other nearby co-operatives, it’s taking part that matters.”

By joining in and doing something during Co-operatives Fortnight, co-operatives will not only be able to promote co-operation as a better alternative, but will also be able to raise the profile of their own organisation.

Co-operativesUK is co-ordinating some of the major activities, which includes work to demonstrate the benefits of co-operation to business and society as well as Co-operatives 2010, the flagship conference for the co-operative sector, this year in Plymouth.

Co-operatives Fortnight will end with International Co-operatives Day, celebrating co-operation across the globe.

“Be part of Co-operatives Fortnight,” says Ed. “It’s going to be powerful. And the more people that take part, the bigger impact we’ll have.” 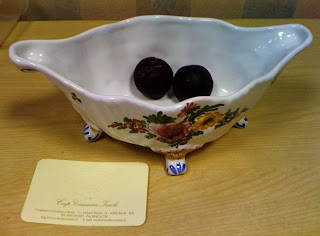 On Friday Co-operatives UK received a study visit from Legacoop Emilia Romagna (A regional branch of the Italian equivalent to Co-operativesUK).

Here is a quick summary from the discussion I thought people might find interesting.

The image is of a gift we were given, manufactured by one of their worker co-operatives.

Emilia Romagna has the lowest unemployment rates in Italy and the highest GDP per capita. I wouldn't like to presume, but this might have something to do with it being one of Europe's top regions for the number of co-operatives. Just under one out of every two inhabitants are members of at least one co-operative.

Impressive figures, and a good chunk of them are worker co-operatives. How do they achieve such a large co-operative economy?

They do have quite a good legislative environment, Local Government is favourable towards co-operatives and their are some tax benefits to being a co-op (see later on). The most important factor is probably a long tradition of co-operation and the co-operative infrastructure.

Legacoop is one of the the national organisations set up to unite and promote co-ops (There are Socialist, Catholic and other ones as well, its a bit messy). Legacoop has regional branches who in turn have local and sector based units below them. Legacoop performs the following roles:
Legacoop has a regional service network, that provides advice and direct services to member co-operatives on: health & safety, employment, legal, financial, environmental etc. They have started to develop services on: quality control, innovation, internationalisation, corporate social responsibility, and change management. Wow what a list!

Bellacoopia - Its aim is to spread co-operative culture among students in Secondary Schools. This is done primarily by creating "virtual co-operative companies". I'm guessing similar to our Young Co-operatives or the more mainstream Young Enterprise. In 2008 in ER alone they were involved in 70 schools (88 classes and 1950 students).

Generazioni - Its aim is to build permanent network among people under 42 who work in legacoop and associate co-operatives. So they can share values, experience and socialize. They also develop projects of interest to participants and put forward strategies/policies to the national association. This project was set up to deal with issues of aging co-operative personnel and build up the next generation of co-operators (could be argues we have the same issue in the UK).

Could UK Co-operatives have this same level of commitment to solidarity and develop a co-operative economy as large? I hope so.

The Co-operative Debate will be taking place at Co-operatives 2010 (Plymouth) and is an opportunity to share views and provoke action on subjects of relevance to the whole movement.

Last year's winning debate - a call for a co-ordinated co-operative response to climate change - led our support of the ACT! Campaign, and resulted in increased coverage of this important issue throughout the movement.

We are also launching Co-operative Fortnight, 19th June to 3rd of July which was one of the other entries.

These member suggested debates do make a real difference to our actions. If your co-operative is a members of Co-operativesUK why not suggest a topic for debate. I came into work this morning (albeit a bit late from oversleeping) with a bounce in my step. There is nothing quite like spending time with a bunch of people who share your vision for the future.

Yes it is that time of year, Future Co-operatives 2010 where advocates of co-operation get together and talk about the future of the movement and what it will look like.

On the Saturday Ed Mayo (Secretary General, Co-operatives UK) gave a thought provoking speech on the case for co-operation. How it is part of our human nature to share, work together and yes, co-operate. He spoke too about the state of the economy, society in general and how there is an alternative to the current situation.

How our challenge as co-operatives are to be that alternative; to evidence and argue that co-operation and co-operative business works and can create a more equal and sustainable future.

Sion Whellens (Calvert's) ran a session on Principle 6 and the power of co-operating in business. How our ability to use each others networks, increase all our business opportunities is under utilised (something I have talked about before in my blog). A great example of this in action: one delegate as part of their 60 sec pitch requested an introduction to a permanent secretary in a Government ministry, amazingly someone was able to deliver.

Vivian Woodell (Chief Executive, Phone Co-op) ran a session on developing a successful affinity scheme. The Phone Co-op offers a deal where co-operatives and organisation that promote their services get a share of the resulting sale. Co-operatives UK takes part in this scheme, (we pass on this share direct to our member resulting in a 6% discount on phone calls) members offers .

The Co-operative Group launched www.hive.coop a website for members to socialise and talk about co-operatives (yes I've already created a worker co-operative group, can you find it?).

The Saturday finished off with a Q&A's panel session chaired by Jo White. The event was great and gave me renewed focus in my work.

I was left however with the feeling that it could have been bigger and involved a wider audience: Housing Co-operatives, Credit Unions, employee owned businessed and others interested in creating a better world through co-operation.

This event seems to have grown every year, I am already looking forward to next year and hope you will be there too.
by Unknown at 1.2.10 1 comment: Links to this post

This blog contains opinions from and about the 500 worker co-operative and employee owned businesses in the UK. If you are interested in this form of business get in touch:
john.atherton@uk.coop
0161 246 2961